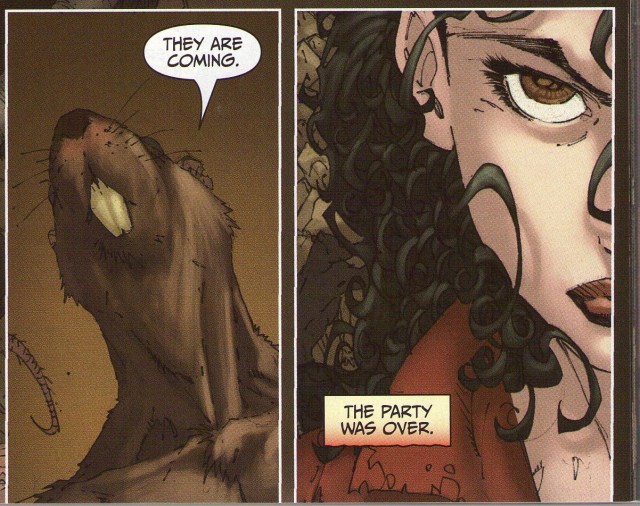 Yeah I own volume 1 of Anita Blake, so what?  I picked it up cheap at Baltimore Comic Con a few years back and I’d always heard good things about it.  Who cares if it’s a “girly” comic?  I got a wife, she can be my cover for owning this.  Regardless, I still haven’t gotten around to reading it, as is the case with several of the trade paperbacks in my collection.  But speaking of Baltimore Comic Con, it’s that time of year again!  That’s right, the 12th annual Baltimore Comic Con starts tomorrow.  The con that’s been called the antidote to San Diego, and the convention that puts comics back in comic con.  I’ve enjoyed a few trips to Baltimore in my day and have watched as this convention has grown in scope and organization, it has been quite an impressive sight to see.  Sadly I’m not able to go this year which is quite a bummer considering several of my friends are prepping for the con as I’m writing this!

But enough of that, let’s talk about this Anita Blake panel.  I can’t really pinpoint what’s funny about this panel, there’s just something about it, it has that certain je ne sais quoi that makes me smirk.  As I was flipping through my comics and trades looking for images for this little segment of my blog I remember coming across this and just thinking what the hell is this thing about?  Here we have the main heroine, Anita Blake, chatting up a bunch of giant rat-men in an abandoned catacomb when suddenly the shit hits the fan and a group of vampires show up.  That moment is shown above.  They are coming.  The party was over.

Any time a hybrid man-rat gives you that warning, remember to cease all partying.