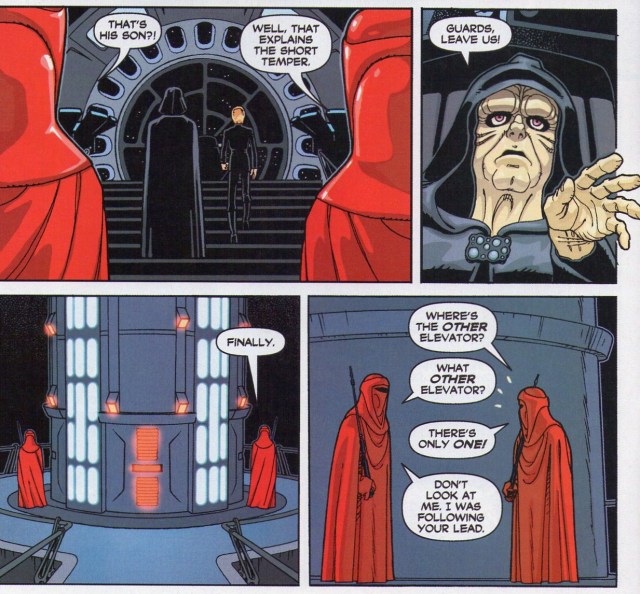 Today I grace your sightballs with a few precious panels from Star Wars: The Return of Tag & Bink Special Edition #1.  Written by Kevin Rubio with art by Lucas Marangon, I would dare to say that Tag and Bink are one of the most beloved Star Wars parodies of all time.  They are right up there with one of Rubio’s other Star Wars parody creations Troops.  Both Troops and Tag & Bink have an “in continuity” comedic style that masterfully fills in scenes and details that go unviewed in the movies, and with a hilarious goofball twist somehow it all winds up making perfect sense.  It’s difficult to explain here to the uninitiated, but let’s just say that if you are a Star Wars fan there’s a good chance you will enjoy Kevin Rubio’s take on the universe.  Although if you consider yourself a Star Wars fan and DON’T know who Tag & Bink are there’s a good chance you aren’t really a Star Wars fan.  Oh burn!

And because I was idle for a few weeks here, and missed one or two Friday Funny Pages, I will grace you with a BONUS panel from the issue.  This image takes place a little earlier in the book (as the setting should make obvious) and just happens to feature a small cameo from a character from one of my other sci-fi fandoms, The Hitchhiker’s Guide to the Galaxy.  Yup, that’s Arthur Dent wandering around on Jabba’s sail barge.  Just another reason I enjoy these books so much and think Kevin Rubio is a genius. 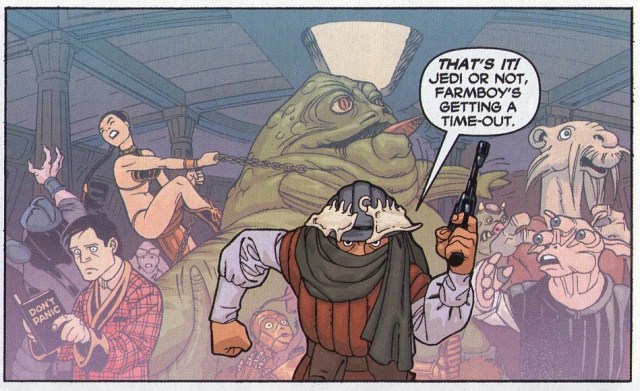 This just gave me a thought.  I know there are plans for a Star Wars comedy cartoon series in the works with Seth Green at the helm, but if they really want that show to work they should get Kevin Rubio involved.  That would be television gold.