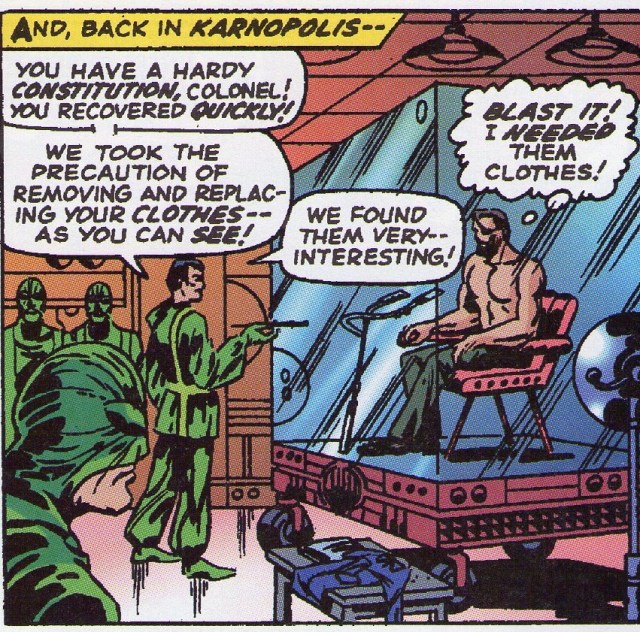 Christ!  This week has really flown by.  Yard work, cleaning up old toys, and dressing as a viking (don’t ask) have really made time fly as it were.  Here it is, Friday already and time for another Friday Funny Pages!  Todays panel comes to us all the way from the 1960’s and Strange Tales #151.  This was the first issue for a young up and coming comic book artist named Jim Steranko!  Based on layouts by Jack Kirby and written by Stan Lee this issue was of course destined for greatest.  Jim Steranko would later go on to take over both the drawing and writing credits for the book, making Nick Fury into what he is today (Samuel L. Jackson?).

When I was searching through my comics for fodder for this segment this particular panel made me chuckle.  Out of context you see Nick Fury waking up after apparently being captured by HYDRA, and the first thing that springs to mind is “I needed them clothes!”  Not the fact that he’s trapped, captured, and surrounded by bad guys.  Though I guess the security deposit on a tux is pretty astronomical.  That’s exactly why James Bond doesn’t rent his tuxedos.

Anyway, of course the real reason he needed his clothes was due to the fact that they were lined with SHIELD crafted spy gear to assist him on his mission and without them he was going to have to rely on his wits to see the mission through, that is if he ever makes it out of HYDRAS glass box of death!  Will he?  Won’t he?  You’ll have to read the issue to find you!

Till next time dear readers!