It occurred to me that I now have over 50 some posts on this blog and yet I have not once written about my dogs!  What about your wife? You might ask, well she can talk for herself, the dogs can not.  My lovely wife did contribute to my Oscar picks post a few months back, and I’ve been working on some other ideas for a collaborative topic we could work on together but she is a busy woman where as I have nothing better to do at the moment.

The two puggles in their terrifying halloween costumes

We have two puggles (that’s half pug half beagle for those who might not be down with the half-breed lingo) and they keep us regularly entertained with their shenanigans.  I decided the best way to introduce the world to my dogs is to write up some quick file cards for them, you know all the pertinent details and information which might be found in some secret data vault somewhere, or used by secret spies in their dossiers of notorious figures.  So without further ado, let’s crack open the secret puggle files and see what threats they pose to the international community! 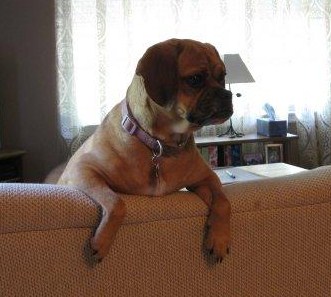 BIO:  Maple is the eldest of the pair of puggles in the house and undeniably the leader of the pack.  Maple enjoys her leisure time and is more than willing to spend a day sprawled out on any cushioned surface.  Her laid back nature should not be taken at face value however.  An athletic hound, Maple enjoys the outdoors and her long naps seem to super charge her energy levels.  At a moments notice Maple is ready to embark on extensive walks or to perform some serious sniffing around in the backyard.  Of the two puggles Maple is the most blood thirsty.  She views the small woodland creatures that reside in her backyard as godless intruders infringing on her liberty and she has been known to take drastic measures to push back against these wild things that dare show themselves in her presence.  To date Maple has a known kill count of 3, and her bloodlust doesn’t seem to have yet been quelled.  Though Maple enjoys regular playtimes and canine socialization, she prefers the company of people and will more often than not try to lounge with her human family members rather than Falkor or other dogs. 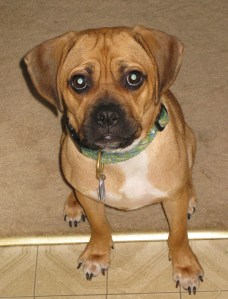 BIO:    Falkor is the youngest of the puggle pair and still has a great deal to learn about the world, thanks to Maple he is learning several life lessons the hard way.  Falkor is young, playful, and energetic.  If there is any opportunity to play Falkor will dive right in.  His constant prodding and goading often gets on the nerves of Maple, who generally wishes only to sleep.  When he does manage to agitate his comrade enough it usually erupts into a wild bout of chasing and barking throughout the house.  Falkor is not the brightest dog, and more than once his wild running and determined tail chasing have lead him straight into a wall.  Though Falkor is often curious he finds many new objects to be frightening and approaches them with measured caution.  Not gifted with the same instincts as Maple, Falkor has no interest in hunting and killing rodents he is more of a pacifist who prefers playful wrestling and chewing on animals of the plush variety.  Falkor is very friendly and enjoys meeting new and different dogs when he visits the dog park he literally has to be dragged away from the rest of the pack when it comes time to leave.  Though generally sweet and calm there was an incident early on when Falkor accidentally nearly bit through his master’s thumb as he overeagerly chomped down on a treat.  Just further proof that though puggles can look cuddly and cute, they should not be dealt with lightly.

So there you are those are my two ferocious puggles and as a bonus I leave you with this video I put together of one of their epic chase sessions!