It looks like it’s about time for the next installment of my Eternia Restoration Project and if you’ve been waiting for a close up look at the individual action figures of my Masters of the Universe collection, then this is the post for you!

Cleaning up this group of figures wasn’t as nearly as difficult as cleaning up the mouse-urine-soaked hoard of GI Joes that comprised my Terrordrome Renovation Project a few years back.  By comparison this toy restoration will seem as easy as a sparkling wave of magic issued from the elegant fingers of the mysterious Sorceress of Castle Grayskull!

To begin I separated all of the accessories and weapons, figured out exactly what I had, and (after a quick internet search) sorted them all out to the appropriate heroes and villains.  Then over the course of a few days I gathered up small batches of the figures and gave them a dunk in a bucket of soapy hot water, gently scrubbed them with a toothbrush, rinsed them off, vigorously shook out any excess water from their hollow abdomens, then toweled them off and let them dry over night.

Like I said most of these figures were in pretty good shape, all things considered.  Sadly several figures I thought to be complete were actually missing arms, accessories, or were just completely broken.  Also there were a couple of otherwise flawless figures who had fallen victim to unprovoked pet attacks and were irrevocably scarred by dog teeth.  Apparently the family dog at the time was deep in the puppy chewing stage when some of these figures entered my collection.

In a few of these cases I was able to take a very small pair of wire cutters and trim away some of the gnarly plastic snags and gouges.  After some delicate snips and clips it actually helped shape up some of the nastier bite marks, making the figures slightly less disfigured.

As far as cleanliness went though there really wasn’t much to contend with.  One or two of the Eternians had been tatted up with some marker at some point, a couple were just mysteriously sticky, but the only real troublesome figure was the legendary Moss Man.

Covered in a fine coat of coarse green felt, Moss Man not only had fur adhered to his stock Masters of the Universe body but said exterior moss was originally endowed with a distinct perfumed scent.  All of that situation; a brillo pad fur, adhesive undercoat, and whatever chemical magic was used to induce that smell combined with years of play meant that Moss Man had gathered a lot of gunk, identifiable and otherwise, all across his namesake moss!

Even cleaning Moss Man however was not an arduous task, he just took a little extra time as I gently brushed out the years of embedded carpet fibers and pet hair.

All in all the best way to describe this effort is to say that I spent a few hours of my free time giving sponge baths to a large group of musclebound men in my basement.

But enough about that let’s take a look at the results! 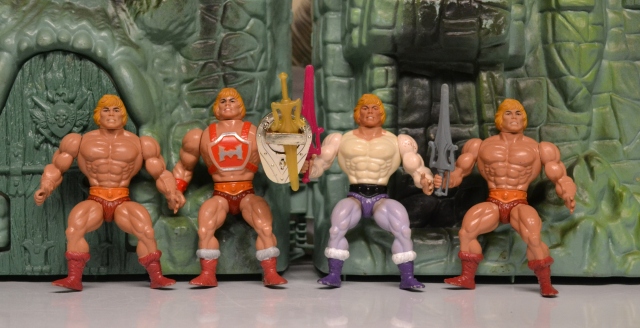 Here we see a group of recently washed heroes of Eternia: Mekaneck, Cyclone, Wundar, and Ram Man.  Mekaneck is missing his armor, Cyclone is complete with his lenticular chest piece and shield.  Wundar is actually a mail away promotional variant of He-Man given away from Wonder Bread.  Fans and collectors gave the brown haired version the name Wundar and the name stuck!

More heroes! Fisto (you read that right!), the aforementioned Moss Man, Man-E-Faces, and Roboto with theme song by Styx.  Moss Man is complete with his brown club.  Roboto is missing one of his interchangeable arms. Man-E-Faces and Fisto are missing their weapons. 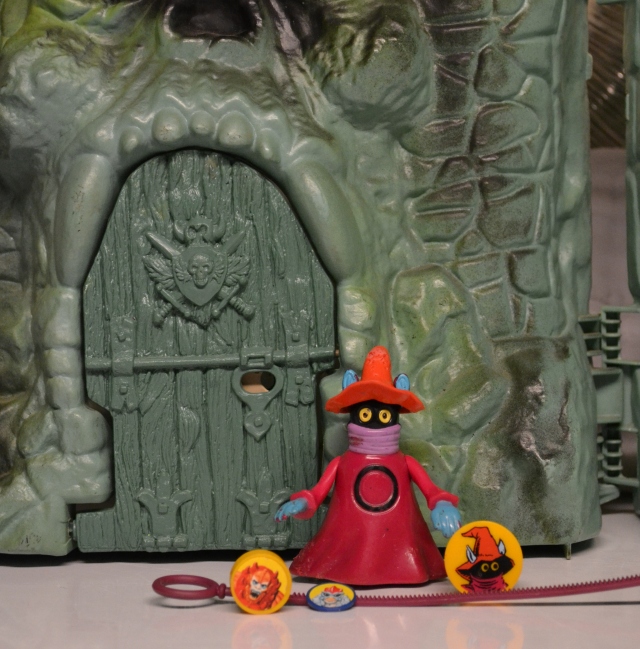 Childhood favorite Orco with his weird stack of coins accessory which features other characters pictures on them.  (Of course most of those are missing)  He also has a rip cord that would send him spinning.  Also pictured is a random Orco stamp that was in my collection.

Baddest of bad asses SKELETOR seen here in his battle damage variety and undamagable original flavor!  Although battle damage Skeletor is missing his accessories I was ecstatic to find that the classic version was 100% intact!

Four of my favorite baddies: Fakor, Trap Jaw, Stinkor (the villainous scented equivalent of Moss Man), and Tri-Clops.  These guys were the best at being the worst!  Whenever I was plotting evil deeds these would be my go to guys to make it happen.  However in the process they lost most of their accessories.  Except Stinkor, though at this point he has lost his distinctive scent.

Skeletor’s B-Squad: Mosquitor, Whiplash, Webstor, and Spikor.  (I’m sensing a pattern here with the names.)  Whiplash was one of the figures that received the worst of the canine maulings.  Although you can’t quite see it in the picture his entire right arm is chewed all to hell.  A lot of cool action features with these four though, dripping blood, whipping tails, zip lines, and retractable arms!

The Evil Horde!  A revitalization of the Masters of the Universe meant new and better figures!  Enter the Horde, these guys pulled double duty battling He-Man AND She-Ra.  Who has the time?  Seen here Mantenna, Hordak himself, Grizzlor, and Leech.  Leech had a great feature, he had a vacuum sealing mouth.  When you pressed a button on his back he could suction up to flat surfaces!

Let’s not forget about King Hiss and the Snake Men!  Actually let’s go ahead and forget about them, I was never really much of a fan.  But these two were pretty cool, Rattlor and Sssqueeze.  In my story lines these guys were always on loan from King Hiss in order to repay Skeletor and/or Hordak a favor.  These were the only Snake Men to ever grace my MOTU collection 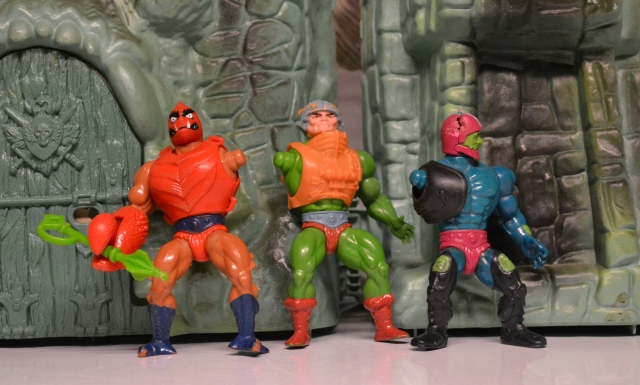 Sadness.  Let us not forget our fallen heroes (and villains).  Here we have the broken toys.  Clawful, Man-at-Arms, and Trap Jaw.  Thankfully I had two Trap Jaws and the other was in fairly decent shape.  Unfortunately Clawful is missing an arm, and that crazy crab curmudgeon was one of my favorites!  Similarly Man-at-Arms has encountered an equally disarming fate.  I’ll be vigilantly on the lookout for these missing limbs as I occasionally go through old boxes at home and at my parents house!

Once again we have my wife’s She-Ra collection, finally reuniting Prince Adam with his sister Princess Adora under the roof of Castle Grayskull!  Pictured: SweetBee, Frosta, Perfuma, She-Ra, Bow, Glimmer, Castaspella, and the jealous beauty Catra!

And just for shits and giggles here is my small collection of Masters of the Universe figures from the early 2000’s as sculpted by the legendary Four Horsemen.  As a kid I wanted the original Merman and Beast Man but they always eluded me but that all changed in 2003!

Well there you have it!  Up next the VEHICLES!