Here is yet another comic book post from me this week!  Often times you can find some real zany panels throughout the pages of comic books, especially when they are taken out of context and shown by themselves.  That’s exactly what I have done here today.  I plan on making this a weekly segment of my blog, bringing you my favorite panels from the pages of various comic books that display quirky or funny scenes.  In fact it was this weeks panel which sparked this idea and sent me off on a hurried flip through my trades in search of other such gems!  Some that I’ve found aren’t funny, but more weird, others are creepy, and a couple aren’t limited to single panels but two or three that go together.  So there aren’t really any rules to this, I’m just going to be presenting panels that I like, but that’s not to say they will be panels that I think are “cool” with stellar art or “badass” depictions of the characters.  You get that all the time in comics, especially these days.  This segment is based purely on my goofball sense of humor, I’m looking for that certain whimsical ju nu se qua!  And some of the upcoming images I could imagine seeing as gifs in responses in forums, or maybe even one day as internet memes, oh to dream!

This panel comes from way back in Iron Man #149 during the epic and now legendary story arc where Dr. Doom and Iron Man get caught in an accidental activation of Doom’s time machine and get sent back to the age of King Arthur and Camelot where the two of them, of course, take up opposing sides in an ongoing struggle between the knights of the round table and the evil forces of Morgana le Fay.  It’s all collected in a trade simply called “Iron Man VS Dr. Doom” check it out if you’ve never read it.

I don’t know if this panel was trying to go for some humor or not.  My guess is that it probably was, things weren’t always taken so serious back in the day.  Intentional or not it makes me laugh and goes well with my more serious discussion of the Arthur legends in my last blog entry!

I recently read David V. Barrett’s book entitled Secret Societies, which I would highly recommend for anyone interested in Masonic legends, history, or esoteric spirituality.  It is a very well written book that covers a wide range of groups that are considered “shadowy” or “secret.”  One thing I especially liked about the book is that the author takes a very straight forward approach.  When he has facts he cites them, and when something is not solid, or comes from a second hand source he lets the reader know.  Just a very well researched, well put together read that presents the information without taking any specific stance.

One concept, brought up later in the book, which I found interesting was the idea that certain groups that were religiously persecuted such as the Cathars managed to embed their philosophies and spirituality into outside sources so that some aspects of their ways could continue on after their specific organizations were disbanded or destroyed.  One example of this the author brings up is Tarot cards.  Some believe these ancient mystic tools have their origins with the ancient Egyptians.  Others feel there is some type of magical connection between the iconography of the cards and the human pyche.  The author however more or less dismisses these ideas in favor of a more mundane scholarly development for the Tarot pack.  Barrett suggests that the Tarot deck was designed as a library of sorts to explain certain esoteric beliefs and practices, preserving these ideas under a guise of symbols and riddled images.  Thus these concepts remain laying in wait for curious minds to unlock the greater ideas within, similar to the riddles and images written down by the medieval alchemists.

Barrett of course goes into a long detailed history, making a strong case for himself by presenting a progression of various methods used to preserve ancient spiritual traditions that would otherwise be lost.  One of the evolutions of this practice of hiding “forbidden” truths in plain sight particularly piqued my interest however.  Towards the very end of the book Barrett posits that the familiar and varied tales of King Arthur and his knights of the round table may in fact be yet another example of esoteric ideals preserved in popular culture, here they are even shielded by a wholly Christian context and symbology. 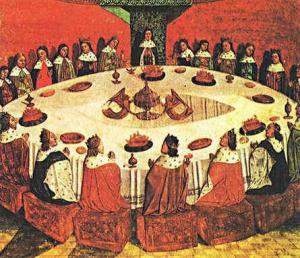 The knights of the Round Table

To paraphrase, Barrett puts forth that Arthur and the romanticized version of his knights of the round table are actually a parable-ized transference of lost esoteric beliefs that were deemed forbidden by the doctrines of the church.  Barrett claims too much effort is spent in our modern day attempting to strip away the stories of the Round Table in order to discover the true historical King Arthur, when in fact that was never the point.  Arthur gave the authors of the day a place to flesh out their beliefs and concerns, and was not a bunch of French writers glorifying the history of an English king.  One small part of Barrett’s much deeper theory is the concept of chivalry which plays such a large part in the Arthurian cycle.  Chivalry, as Barrett reminds the reader is a guide for knights to do good in society and be passionate men of god, a concept that was quite unheard of among the warrior class before the formation of the Knights Templar, which are figures repeatedly brought up in the book, and that chivalry in the Arthur stories is actually a preservation of the Templar teachings.  Accordingly Barrett implies that the themes of courtly love do not intend to place women on a pedestal but rather make them equals, such as they were in the Cathar society, where women could be members of the priesthood and were wholly equal until the church deemed it heresy and wiped them out.  The idea of courtly love and a non-physical romance between men and women also harkens to the older Gnostic ideas that the physical world is evil, that everything that most people believe to be right is actually a lie, and that the god of the bible is in fact the devil blinding man to the true god beyond.  Some Gnostic sects believed that mans best path was to live ascetic lives, not to reproduce, and instead to allow our souls to be released from the material realm. 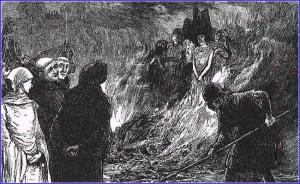 The Cathars were a widespread esoteric sect deemed heretics by the Catholic church and subsequently wiped out.

All of this is far more complex, and doubtlessly seems muddled and confused as I try to retell it here but it is all very interesting, that is if such topics interest you.  The one concept about the Arthur stories that I found particularly revealing was the idea that the tales of King Arthur were actually, despite common conceptions, very anti-church.  They were of course not free of religious themes, but rather against an organized, specified form of it.  Just as the knights were all part of the Round Table they each were on their own very personal, individual quests that originated from it.  Thus Barrett unravels the parable of Arthur as one that reinforces the idea of spiritual beliefs, esoteric thought, and individual enlightenment while at the same time rejecting impersonal dogmas, organized oppressive religion, and such titles as Christian, Jew, or Muslim.

Lastly the hinted return of King Arthur from the misty halls of Avalon is reminiscent of the hope for a return to a free, individualized spiritual world with a renewed interest in esoteric ideals where individuals are wholly removed from organized religion and open once more to the older paths of higher thought.

Sir Bedivere and the dying King Arthur by John Duncan

Whatever you believe personally, if you have an interest in the occult, secret societies, or religious development I once again highly recommend David V. Barrett’s Secret Societies.  It was at the very least informative and thought provoking.  For me personally it gave me something new to think about and analyze the next time I am reading some of my favorite Arthur legends.