As a humungous Star Wars fan and a collector of various Star Wars memorabilia I often hear the question “What’s your favorite item in you Star Wars collection?”  That is a question I don’t think I’ve ever successfully answered.  I constantly think about it however, trying to come up with an answer for the next person who asks.  Some of the contenders are my small Star Wars vinyl collection, the old cassette and projector reel set my wife salvaged from an abandoned classroom media collection, the few figures I have from the original Star Wars toy run that I played with as a kid which were purchased from various yard sales and flea markets, or the theater projection reel of the trailer for the Star Wars special editions that I stole from the local movie theater during my college days.

All of those are fantastic, and each has some of my favorite Star Wars related memories attached to them.  These items are certainly more valuable to me than the most expensive piece in my collection, a good story and a shared moment are more important than an original rocket firing Boba Fett figure.  However the one element of my collection that perhaps fueled my Star Wars fandom more than any others (with the exception of the movies themselves) are my boxed sets of the Star Wars radio dramas.  For anyone out there who is an avid Star Wars fan and who hasn’t listened to the Star Wars radio dramas you’re really missing out!  Produced for NPR and put together with full permission from George Lucas himself the radio dramas are full of many of Ben Burtt’s familiar sound elements from Star Wars; firing blasters, Vader’s menacing breathing, and the distinctive sound of TIE Fighters soaring through space.  There are even several recognizable voices from a few actors reprising their roles for the radio. 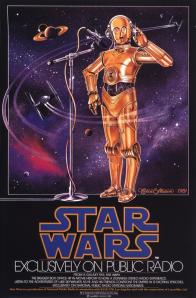 What I’m getting at is that the Star Wars radio dramas really do a great job expanding each of the movies, fleshing out the characters, and really adding a helpful perspective to the action seen in the movies.  Questions that might arise during the movies, are answered in the radio dramas.  Lines of dialogue from the films such as Vader’s quote to Leia “You weren’t on any mercy mission this time!”  Suddenly become crystal clear and full of meaning.  By adding several hours of storytelling to each of the already established narratives of the Star Wars films, the radio dramas give us the opportunity to delve deeper into the Star Wars universe and have a better understanding of why the characters do what they do.

The only thing that can be a little off-putting for us hardcore Star Wars fans is hearing iconic bits of long memorized dialogue being recited by new voices with different, unfamiliar, inflections.  The most difficult element to get used to is the casting of Darth Vader, sadly James Earl Jones does not take on the mantle of Vader in the radio dramas thus leaving the part lacking that iconic grandeur that has become associated with the voice of the dark lord of the Sith.  Don’t get me wrong, Brock Peters, an actor who has his own sci-fi cred from his work on Star Trek and elsewhere, does a wonderful job as the radio voice of Vader.  After awhile you get comfortable with Peter’s voice in the role, but honestly who can replace the smooth booming baritone of James Earl Jones?

There are however several actors from the movies who pick up their parts once again in the radio dramas.  Anthony Daniels, Mr. Star Wars himself, is the only original cast member who performs in all three of the radio dramas as the distinctly prissy C-3PO.  Mark Hamill returns as Luke for A New Hope and The Empire Strikes Back, but sadly is not present for Return of the Jedi.  I assume this was Hamill’s first venture into voice acting and perhaps paved the way for his future career?  Billy Dee Williams provides the smooth talking dialogue for Lando Calrissian in the Empire Strikes Back but sadly he too is not a part of Return of the Jedi.  There are also some special guest stars who take on some of the other major parts.  John Lithgow gives an amusing performance as Yoda in Empire and Jedi.  Ed Asner speaks fluent huttese in his role as Jabba the Hutt, and Ed Begley Jr. voices Boba Fett in Jedi delivering his dialogue with a whispering menace.

The Star Wars radio dramas provide a rediscovery of the Star Wars saga.  If you haven’t listened to these audio productions I highly suggest you sit down and make time to take them in.  With the last days of summer winding down there isn’t a better time.  Set up the hammock in your backyard with the CD player beside you and close your eyes as you return to Tatooine to discover new adventures of Luke Skywalker.  Maybe you’ve got a vacation on the horizon and a long car trip ahead of you, the radio dramas would make for a perfect listening experience for you and the family. 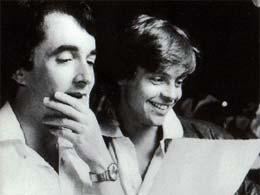 Anthony Daniels and Mark Hamill go over a scene from A New Hope.

At  6 ½ hours long the first production, A New Hope, is the longest of the dramas and provides the most new material for Star Wars fans.  It reveals the Empires subjugation of the planet Ralltiir, how Princess Leia begins to learn just how ruthless the Imperial forces really are, and how Leia and Bail Organa get into some serious trouble with the Empire.  There are also several new sections of Luke on Tatooine with his friends in Anchorhead where we get a chance to learn how Luke came to be known as the best pilot in the outer rim.  We even get the few moments just before where the movie opens and what leads to the Star Destroyer chasing down the Tantive IV.

The Empire Strikes Back radio drama clocks in a little shorter, at 5 hours long.  We get some more information about the construction of Echo Base on Hoth and find out how Luke was promoted to commander.  There are several expanded scenes in this second production where we get a little more information about classic moments from the movie.  We get to hear Captain Needa’s ill-fated apology and learn that Luke’s leap from the bridge in Cloud City was indeed a willing attempt to take his own life rather than be taken in by Vader to join the Empire.

With only 6 episodes and just 3 hours long the Return of the Jedi production is the shortest of the radio dramas and the one that provides the least amount of new material beyond the films.  We do however get to hear how Luke constructed his green bladed lightsaber by parsing the journals of Obi-Wan, a scene that has been revealed to be included in the upcoming blu-ray release of the Star Wars movies.  There are some extended scenes aboard the second Death Star and at the court of Jabba the Hutt, including an interesting moment between Han Solo and Boba Fett within the dungeons of Jabba’s palace.

When I first listened to the Star Wars radio dramas I was blown away by how well done they were and just how much was revealed about the Star Wars universe.  Countless hours of my youth were spent laying on my bed listening to the unfolding story of Star Wars as heard from a pile of cassette tapes.  My imagination easily filled in the scenes as my favorite heroes and villains worked their way through new locals and revealed events that went unseen in the original trilogy.  The radio dramas gave me a lasting appreciation for the unique medium of radio, and provided me with a whole new Star Wars cast to idolize.

Although choosing my favorite bit of Star Wars memorabilia is still something of a challenge, I can say without hesitation that if I were to be dropped off on a desert island and I had to choose only one group of my Star Wars swag to take with me, I would definitely bring along the Star Wars radio dramas.  Well, that and a power source and some type of audio player!

Here’s a quick rundown of some of the cast & crew of the Star Wars radio productions!

Ed Begley Jr. – Boba Fett (Return of the Jedi only)

Some links to more information about the Star Wars Radio Dramas:

The Empire Strikes Back Radio Drama

Return of the Jedi Radio Drama